As one of few companies that have truly stood the test of time, Pietro Rosa TBM celebrated its 130-year history at the Paris Air show. The event was well attended with customers, officials and business partners.

A memento of the event was recorded in the form of a crystal obelisk that historically represented technological ingenuity, which also embodies and symbolises the spirit of the company. 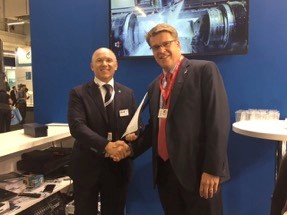 The Group CEO, Mauro Fioretti took the opportunity to speak about the secret of longevity of the company through its Values, its people and its ability to adapt to the evolving market places that it operates in saying:

“Ingenuity in technology is what has transformed the company into a international vertically integrated platform that has the ability to utilize diverse technologies in support of our customers needs through the entire lifecycle of a gas turbine.

We recognize the market is ever changing in terms of technologies and demand; as such “change to grow” is in the DNA of the company but always recognizing that the people are the most important asset of the business.

Our commitment is to leverage on the “know how” that has been built over the generations and capitalize on the intangible assets to take the company to the next level.”

Only through integrity, constant evolutionary change, foresight and investment can companies meet the challenges of the marketplace and thrive was the underlying message.

The group invests heavily in R&D and innovation and has built up its intellectual property in hot forming, machining and surface finishing technologies through a solid collaboration with universities and research centers globally.